The store will not work correctly in the case when cookies are disabled.

We are professional in making Antique & Vintage Jewelry

For understanding about difference between vintage jewelry and antique Jewelry, you can continue reading this article for some information about Antique & Vintage Jewelry

Vintage jewelry is any jewelry piece that is less than 100 years old, but more than 50 years old.

After the 1920's, there were a few different eras of vintage jewelry. In the early part of the Retro Modern Era (1945-1960), Hollywood-inspired pieces were colorful, bold and flamboyant, including large cocktail Vintage rings, bracelets, necklaces, pins, and charm bracelets. That time the jewelers used gold instead of platinum because it was not available to the jewelry industry during world wide 2.

Also Jacqueline Kennedy inspired 60's jewelry and dramatic and gold jewelry of the 80's are considered as vintage jewelry.

Antique Jewelry refers to the jewelry which is more than 100 years old.

The most popular time frames of antique jewelry are:

The most popular gemstones and cutting styles in Georgian Jewelry were diamond, ruby, sapphire, garnet, topaz, coral, shell, agate, chrysoberyl , and pearl . In 1780, the jewelers used paste or glass as a gemstone alternative.

In terms of jewelry, each of these periods had its specific gems, motifs, metals and fabrication techniques. The jewelry that you wore was very important in this period because it wasn’t only reflected your wealth, but also social standing and your status.

Some of the decorative motifs of jewelry of Romantic period were flowers, hearts, and birds. These pieces were adorned with seed turquoise, pearls and coral.

Antique Jewelry On the Grand period one of the Victorians art was mourning; they designed black clothes and jewelry to be worn in the months following a relative’s death. Most of the jewelry of this period was made of jet, fossilized coal and black onyx. These stones sometimes dressed up with seed pearls, which was the symbol of tears.

The Aesthetic period was different of the early Victorian era Jewelry as they focused on mass-production, but this period renewed its appreciation for hand craftsmanship. Jewelry made out smaller, lighter and daintier than previous Victorian eras.

Also that time women were participating in certain sporting events, so they looked for smaller and more practical jewelry.

Diamonds and semiprecious gems such as amethysts and opals became frequent.

This period was very short due to reign of King Edward VII (1901 - 1910), his wife and his sporting lifestyle made out a new looking in jewelry motifs.

Queen Alexandra was a fan of fashionable ‘dog collar’ plaque necklace, which often used black velvet on its back. 6-16 rows of pearls which was a challenge of wearing was a fashion of those days.

Marquise and pear-shapes also became more available. The beauty of a finished diamond was more important than its weight.

In late of this period, single cut diamonds replaced the rose cuts of the past. With faster cutting techniques, the sparkling 17 facet single cut became popular. Other popular diamond cuts were Smaller Swiss-cut and small European-cut diamonds as well as Old mine diamonds.

The Art Nouveau jewelry style is one of the most memorable and recognizable periods with the artworks of the time and with specific pieces. Its name is French for "New Art," and even now, after a century, it still seems quite modern-looking.

In this period the jewelers focused on craftsmanship and the popular motifs of this period was the organic curves insects, stylized plants and flowers, landscapes, and mythical creatures such as dragons depicted. The jewelers used variety of colors, while the pastel palettes added to the dreamy quality of the jewelry. The popular gems were moonstone, ever-changing opal and the materials such as horn, amber, and pearl used as natural materials.

After reading this article may still it’s hard to find out the difference between Vintage Jewelry and Antique Jewelry, because there are much more specific details for each type.

But always remember there is a standard rule for specify the Antique Jewelry and Vintage Jewelry; 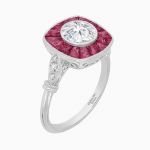 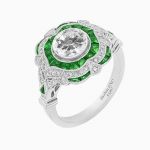 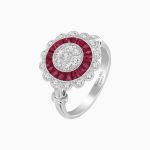 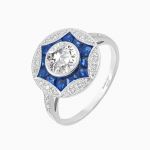 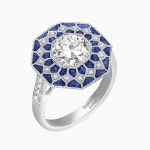 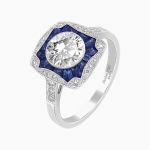 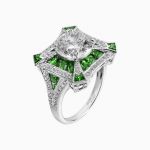 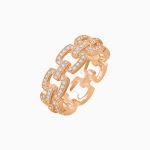 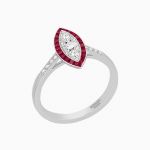